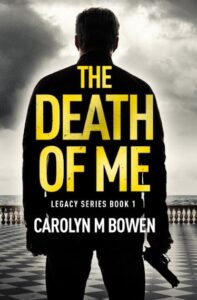 The Death of Me (Legacy Series book 1) by Carolyn M. Bowen

He’d rather save the Earth than exploit it. But buried bloodline secrets could force this man of peace into a life he dreads…

David Jones moved to Tuscany to claim some much-needed headspace. Hoping to focus on his philanthropic efforts and find love, he vows to steer clear of his family’s underworld business. But he’s dragged into an ugly web of organized crime when a good friend is heartbreakingly murdered…

Thrust into a leadership role, David navigates the treacherous mob world while becoming romantically entangled with a stunning young female intelligence agent. But even as he faces traitorous threats from within, his new love interest’s standing with Italian authorities might be his fatal undoing.

Will this struggling humanitarian get his happily ever after or end up sleeping with the fishes?

The Death of Me is the sweeping first book in the Legacy series of mafia thriller novels. If you like morally gray characters, expansive European settings, and edge-of-your-seat action, then you’ll adore Carolyn M. Bowen’s gritty tale.

Buy The Death of Me to settle old scores today!

The Death of Me is an absolute must read crime fiction, thriller and mystery novel and the first extraordinary volume in the new “Legacy series” written by Carolyn M. Bowen, author of the incredibly popular “Sydney Jones series.”

For readers of the author’s previous novels, you’ve met the main character, David Jones, having been there when he was born and watched as he came of age. Now, he’s striking out on his own to research and fund his passion to make the world a safer place.

He vacated their beautiful island home to keep his family safe should his research produce deadly enemies. His new domicile was at the lovely Tuscany villa on the plush land of the vineyard and olive groves he inherited from his mother.

Due to an unexpected murder of the steward of the Italian enterprise, this peace-loving man finds himself next in line to carry on the family’s Italian business. A challenge he accepts, for a leader is required to move the business forward.

His new responsibilities put him at odds with the woman foreign intelligence agent he was deeply attracted to. He questions how to maintain the difficulty of this relationship he so desires – and keep his clandestine Italian mafia connections secret. Being a thirteen-generation heir to the family business, he couldn’t let attraction stand in the way of keeping the family enterprise intact and safe from opposing mafia clans. But could he sidestep his situation and make a romantic relationship possible?

As the story unfolds and intensifies, the characters develop perfectly, adding surprising twists and turns when least expected. You’ll go from the shadows to the underbelly of the mafia with intricate, accurate details about the Italian mafias. You’ll feel the anguish and turbulence that marks this enterprise. And the idea and importance of family first couldn’t come at a more valuable time. And the main character, David, brings it home.

The Death of Me is a fascinating, thrilling and amazing cultural and historical journey through the intrigue and wonder of Italy. Carolyn M. Bowen’s stunning expressive writing style brings Italy to alluring life – drawing the reader in with feelings of longing to be there amidst the beauty, romance and passion. But then, the dark criminal secret societies which are center stage of this story, drive this sweeping mystery thriller forward and had me holding my breath several times during the suspenseful, tense and unexpected scenes.

From developing interesting unique characters to creating beautiful settings and fascinating scenes to building a plot filled with crime, suspense, romance and a perfectly thrilling Italian mafia mystery that is startling and unpredictable, Carolyn M. Bowen has proven once again what an excellent writer and storyteller she is.

Buy The Death of Me (Legacy Series book 1) by Carolyn M. Bowen today!

Authors: Submit Your Book For Review and/or Promotion